Ahead of the release of SPECTRE this autumn, the Bond Reloaded series takes a weekly look back at each film in the iconic James Bond franchise. This week, Roger Moore is incredibly old and Christopher Walken plays a villain in A View to a Kill.

There was an elephant in the room for the James Bond franchise in the middle of the 1980s. By the time A View to a Kill arrived on cinema screens, Roger Moore was 57 years old and was negotiating his Bond appearances on a film by film basis. It was clear that Moore’s tenure was coming to an end and it was coming after a string of films that had received mixed reviews.

With director John Glen back at the helm after his previous two entries and regular screenwriter Richard Maibaum penning the script alongside Michael G Wilson, signs were promising for A View to a Kill.

It’s an intensely flawed film, but one that packs plenty of punch and has a truly memorable villain who gets one hell of a send-off.

A View to a Kill sees Bond investigating mega wealthy businessman Max Zorin (Christopher Walken) and his bizarre ally and assassin May Day (Grace Jones). He eventually uncovers, with the help of geologist Stacey (Tanya Roberts), a plot to destroy Silicon Valley, giving Zorin a near monopoly on the industry of microchip manufacture.

The issue with A View to a Kill is not that it’s a bad movie, but that its storyline is considerably leaner than its running time. There is no way that the film’s excessive two hour-plus running time is justified and it leaves the early stages of the narrative, set at Zorin’s stud farm, feeling exceptionally baggy. That’s especially true given how little impact Zorin’s horses ultimately have on the wider story. In fact, the most remarkable thing about this aspect of the film is that the script mostly avoids the obvious “riding” innuendos. 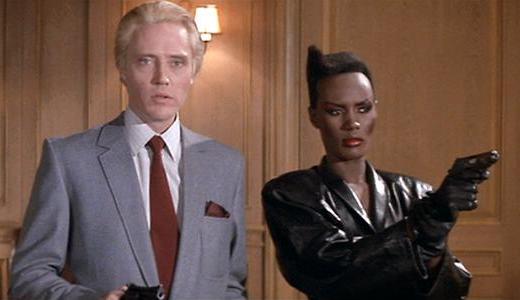 “What would you be without us? A biological experiment?”

Once the film gets going, however, it finds plenty of excitement along the way, aided by Walken’s performance as a genuinely hissable villain. There’s little depth to Zorin, and a sub-plot about him being a monster engineered by the KGB gets little pay-off, but Walken’s work in the role is genuinely terrific and single-handedly elevates Zorin to the level of one of Moore’s best adversaries. His final confrontation with Bond atop the Golden Gate Bridge is one of the most memorable stunt sequences in the history of the franchise.

Credit must also go to the action sequences, which are solid across the board. Zorin’s double-cross of his own staff in a massive mine explosion is directed with real flair by Glen, although it does lose its way when Grace Jones’ May Day is asked to carry a bit of emotional weight. She isn’t a good enough actor and, as a result, her character’s most significant moment rings false.

In fact, just about everyone involved in this film is let down by the lacklustre script and poor storytelling. For a lot of its running time, A View to a Kill feels like a less exciting remake of Goldfinger, but with the addition of a leading man who looks about 100 years old and spends most of the movie making creepy advances at women less than half his age.

A bridge too far?

The later Bond films of the Moore era largely binned the strong female characters of the star’s early movies and the same is definitely true of A View to a Kill, which offers up a selection of women who seem to queue up to hop into bed with a man old enough to be their father for no reason.

The nominal female lead of the film is Tanya Roberts, who initially has promise as a geologist defiantly refusing Zorin’s offer of a financial incentive to roll over and let him win. However, she eventually becomes another woman who waits for Bond to save her. It seems that, with little in the way of stakes for most of the story, it was just easier to give Bond a woman to protect rather than bother putting together a better script.

“I’d sell everything and live in a tent before I give up.”

Despite its narrative and characterisation issues, A View to a Kill does benefit from having a slightly harder edge than many of its predecessors in the franchise. Four years before Licence to Kill became the first Bond to score a 15 certificate from the BBFC, A View to a Kill marked a notable uptick in the level of violence on show in Bond films.

There’s a fair amount of bloodletting, notably in the scene in which Zorin dispatches a potential saboteur by dumping him into the path of a spinning propeller. It also really helps the portrayal of Zorin as pure evil when, after all is lost in terms of his plot, he attempts to kill Bond with an axe in their final confrontation. Although ill suited to Moore’s campier Bond, this level of violence would fit next lead Timothy Dalton like a glove.

Unfortunately, A View to a Kill is incapable of capitalising on this increased violence given its disturbing lack of stakes. In an unusual tactic, the film refuses to play its hand in terms of the major criminal threat until the thick of the third act. Rather than create a sense of mystery and intrigue, though, this instead leaves the film without much of a drive for much of its ample runtime.

In the summer of 1985, A View to a Kill became the first Bond film to premiere outside the UK when it made its bow in San Francisco weeks before the first showing on this side of the Atlantic. Thanks to an impressive showing at the American box office, the film sailed to more than $150m worldwide, despite the worst reviews the franchise had ever seen.

Reviewers were not kind to the film, with Pauline Kael calling the director apathetic. Modern rankings of the Bond films routinely dump the film as one of the worst entries in the franchise.

Moore has gone on record as saying that A View to a Kill is his least favourite of the Bonds in which he appeared. He has also made reference to his own age, noting his shock at discovering he was older than Tanya Roberts’ mother.

“I take it you spend quite a lot of time in the saddle.”

For all of its flaws, A View to a Kill isn’t all that bad in the pantheon of Bond films, particularly given the pitiful entries that had characterised the franchise at that time. Despite its inflated running time and ageing lead actor, the film deserves credit for planting the seeds for an edgier Bond and introducing a terrific villain who would have been an instant favourite if given slightly better material to work with.

Next time, there’s a new Timothy Dalton-shaped Bond in The Living Daylights.

What do you think of A View to a Kill? Did Moore give himself a fitting send-off as Bond? Let me know in the comments section and keep your eyes peeled for an early new Bond Reloaded this week.

You can read my look back at Octopussy here and find other Bond Reloaded articles here.