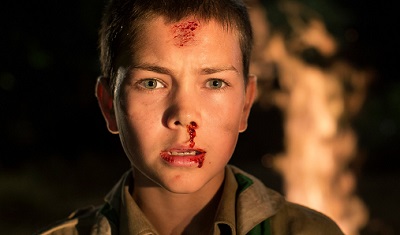 Horror films are in love with the woods. Whether it’s Evil Dead or The Blair Witch Project, the foreboding darkness of the forest plays a major part in the history of the genre. The latest entry in that particular canon is Cub, written and directed by Belgian filmmaker Jonas Govaerts.

Cub follows a scout troop, led by sensible Chris (Titus De Voodgt) and arrogant bully Peter (Stef Aerts). When they tell the youngsters about feral werewolf boy Kai, it piques the imagination of troubled Sam (Maurice Luijten). He goes looking for the beast and uncovers something horrible lurking in the woods.

The film is finally making its way into UK cinemas today for a limited run across the country, followed by a DVD and VoD release on 3rd August. I got the chance to chat with Govaerts about Cub, nostalgia and the state of the horror genre.

What gave you the original idea for Cub?

Weirdly, I only figured out where I got the idea from after the Belgian premiere, when I received a text from my old scout leader: “I see you’re still haunted by your initiation!”

Suddenly, it all came back to me: to earn my animal totem, I had to protect our cub scout troupe from the “evil locals”, which I did by setting up all kinds of silly booby traps around the camp site. So in a way, I figured out the basic plot of Cub about 23 years ago.

How did you go about casting the kids at the centre of the film?

I’d say it was a mix of dumb luck, common sense and hard work.

It was dumb luck in that we found our lead without even looking for him. A Director of Photography I know just happened to show me a music video he shot a while back, and as soon as Maurice [Luijten] appeared on screen, I instinctively knew I’d found my Sam. Before that, I feared we’d never find a young actor capable of playing such a complex role. He basically came to us.

For the other cubs, we used common sense in that we changed the script to fit the personalities of the boys we liked, instead of forcing them to play a character we had written.

| “I encouraged the young actors to improvise as much as possible.”

If a smartass impressed us in the audition, we changed the script to include a smartass; if we found a good singer, we gave his character a bigger part in the singing scene. And so on. I also had no clue what 12-year-olds sounds like today, so I encouraged them to improvise as much as possible.

Finding Kai – our feral child – required the most work. We looked at dozens and dozens of kids, from sport schools, circus schools, and so on.

It’s a hard part, especially for a young teenager. He has no dialogue, but has to be able to emote from behind his mask, contort his body, perform some rather complex stunts. I remember the huge feeling of relief going through the room after Gill Eeckelaert’s audition.

There’s a lot of ambiguity around the film’s central threat. Why did you make this choice?

I personally can’t stand horror films that grind to a halt somewhere in act three, just so the Big Bad can explain his childhood trauma or whatever to the hero. I thought it would be much more refreshing and realistic to dole out that kind of info bit by bit, allowing the viewer to figure out for him or herself exactly what the deal is.

There’s more than one threat in Cub. From Sam’s point of view, you could easily imagine his unhinged scout leader Peter as the major villain of the piece. Even Sam himself has a dark side to him. I find those kind of little nuances and power shifts far more interesting than the usual good versus evil set-up. 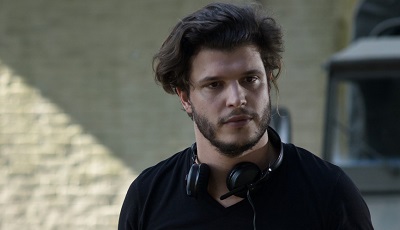 A lot of horror films are set around groups of people stranded in the woods. How did your approach differ?

My main goal was to pay homage to my scouting days. That’s where my interest in horror started. My leaders were always talking about films I wasn’t allowed to watch, so it seemed fitting to choose that particular arena for my debut feature.

I might be wrong, but I don’t think there’s ever been a horror film with cubs as the protagonists, even though a scouting trip seems like the most logical excuse to get lost in woods. Perhaps the scouting tradition is a bit stronger in Europe, and the age might’ve been a factor as well. In America, you have to be at least sixteen to be eligible for cinematic murder.

I just hoped my personal memories of my scouting days – the campfire songs, the night games, the rituals – would make Cub feel fresh and alive.

Did you ever consider making the film in the English language?

I remember pitching Cub to my American manager a few years ago. He advised to make the kids at least sixteen, lose the animal violence, and change the ending. In the end, I’m glad I stuck to my guns and made the film I wanted to make, though I realise doing that makes the chances of an American remake rather slim.

How does the European setting enrich and inform the film?

I have the feeling that, in America, the slasher is considered a bit of a worn-out horror sub-genre. But in Belgium, we don’t have that tradition, which allowed me to play around a bit with the archetypical “killer in the woods” template.

We don’t have real rednecks where I’m from, but there is an undeniable tension between the Flemish side of the country and the French-speaking side. I simply replaced the typical hostile hillbillies with some no-good Walloons, which made the story a bit more relatable for a Belgian audience. I got a bit of flack for that too, which just shows you how touchy the subject is. Thankfully, the Walloon actors could see it for the harmless joke it was.

| “In America, the slasher movie is considered a bit worn out. But in Belgium, we don’t have that tradition.”

Also, we might not have many Hannibal Lecter-like serial killers running around in our little country, but since the infamous Dutroux Case in ’96, the idea of a tunnel-dwelling psychopath targeting children has become a very tangible threat for Belgians of a certain age.

I never set out to reinvent anything: I simply wanted to splash a fresh coat of black, yellow and red paint on a horror formula I know and love. Mainly red.

How did you go about judging the gore aspect of Cub compared to the more tense sequences?

Actually, there really isn’t much gore. I guess we managed to pull off a Tobe Hooper and made you see things that weren’t really there. There’s one extended scene of violence a part of the audience tends to walk out on. If you look closely, though, you’ll see it was mostly achieved through the use of sound effects.

The other supposedly taboo-breaking scene actually takes place entirely off-screen. There’s definitely a part of me that wants to make a full-on Lucio Fulci gore epic one day, but Cub just wasn’t the right story for that.

The theme of human vs. beast looms large throughout Cub. To what extent does the film discuss that idea?

That theme is the main reason why I wanted to tell the story from a twelve year old’s perspective. When I was Sam’s age, I remember some very dark and primal urges welling up in me: scary feelings I wasn’t quite able to comprehend just yet because I was still looking for my place in the world.

Luckily, I grew up in a very loving family, but I often wonder how things would’ve turned out if my environment hadn’t been so supportive. I’d probably be roaming the Belgian woods somewhere.

The film is very horror literate. What were your main sources of inspiration?

I tried to stay away from too many overt film references: if I’m watching a modern horror movie and a character is called Carpenter or Romero, it immediately takes me out of the story. I really hate that kind of lazy, winky fanboy horror.

If I’m honest, the most direct source of inspiration wasn’t a particular movie, but a Belgian graphic novel called Alinoë. In it, a lonely young boy befriends a green-haired, possibly imaginary feral child, who ends up eventually turning on him. I must’ve read it when I was about twelve years old, like Sam in the film, and it somehow always stuck with me.

80s nostalgia is a major part of horror today. Why do you think that is?

I might be over-romanticising things, but I feel the eighties really were the last golden age for horror. You had smart filmmakers with daring concepts, and studios who were willing to give them the proper budget to realize them with unlimited amounts of goo and rubber.

Also, because of home video, there was a real feeling of being part of some kind of secret horror community back then. You’d hear about some obscure horror title, track it down through an older kid in school, and wait for your parents to go to sleep so you could secretly watch it in the living room. These kinds of rituals gave films like A Nightmare On Elm Street, Hellraiser and Halloween an near mythical quality.

Before VHS, you had to either sneak into the cinema, or wait for the film to finally be shown on TV. These days, you simply download the film you want and watch it on your iPad. So that’s another reason the eighties were a very special time for me.

But I don’t agree with the notion that the genre has since been ruined by found footage, reboots and remakes. People forget that The Thing was a remake.

Horror might go in and out of fashion, but it will never die: the genre is far too potent for that. Horror directors might not have eighties budgets anymore, but constraints often lead to creativity. Just look at wonderful, wild, transgressive films like It Follows, Spring, Alleluia, Goodnight Mommy and Bernard Rose’s new version of Frankenstein. 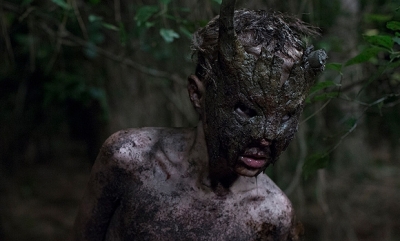 The score really jumped out of me as a major part of what makes the film work. Tell me about that side of the film.

Another stroke of luck. While writing Cub, all I listened to was Zombi – an American two-piece influenced by the soundtracks Dario Argento and John Carpenter. It got me in exactly the right mood each time, so I decided to reach out to Steve Moore (one half of Zombi) to see if he was interested in composing the score… and he was.

John Carpenter explained in an interview once that he only wrote his own scores because there was no money or time for a full orchestra. On Halloween, he simply played along with the images live. Yet his sparse motifs and melodies have such a primal, haunting, timeless power to them. To me, that’s the sound of true horror.

What’s next for you as a filmmaker?

I’m back in Belgium now for some location scouting. We start shooting in October. I’ve also recently started working on what will hopefully be my follow-up to Cub, together with London-based screenwriter Kevin Lehane: Heads Will Roll – an ode to eighties heavy metal horror.

Thank you, Jonas Govaerts! Cub is out in UK cinemas from today and will be reviewed on The Popcorn Muncher soon. You can read my Empire review of the film from the London Film Festival here.