Summer season is well and truly kicking into gear at the cinema now, with several heavy hitters making their presence felt with enormous tentpole releases.

May 2015 is a crowded month, so much so that sci-fi/action sequel Monsters: Dark Continent and British drama A Royal Night Out both miss out on this list, despite being intriguing prospects.

There is big action on show, a number of intimate comedies and a handful of horror movies too. Coming a little late, here are the ten films you really should see in UK cinemas this month.

Fresh from taking care of business in Fast & Furious 7, modern action icon Dwayne Johnson is heading up disaster actioner San Andreas. The film is, somewhat bizarrely, directed by Brad Peyton, best known until now as the helmsman of Cats & Dogs: The Revenge of Kitty Galore and Journey 2: The Mysterious Island.

Johnson plays a search-and-rescue pilot who, in the aftermath of an enormous California earthquake, must battle through the chaos to try to locate and rescue his estranged daughter.

There’s plenty of room in the early summer schedule for a macho disaster blockbuster and, if anyone can bring it, it’s The Rock.

Director Ben Palmer made a considerable splash when he ushered The Inbetweeners Movie to a remarkable box office performance in 2011. His follow-up is a sweet-looking British romcom, with Simon Pegg and Lake Bell at its centre.

Bell plays an unlucky in love woman, who inadvertently ends up on a blind date meant for a friend and simply chooses to go with it. Naturally, her deceit is eventually exposed in true romcom fashion.

It’s nice to see a British spin on the romcom genre and, despite the rather conventional appearance of the plot, the likeable central cast could make this a refreshing antidote to blockbusters. 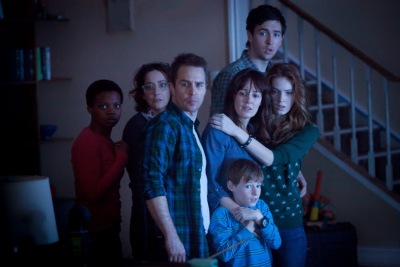 Tobe Hooper’s 1982 horror movie Poltergeist is considered a real classic of the genre, so a remake was almost inevitable. Thankfully, Michael Bay and Platinum Dunes are nowhere to be seen, with Sam Raimi on producing duties.

Rosemarie DeWitt and Sam Rockwell star as a suburban couple who find their family terrorised by malevolent spirits when they move into a new home. They recruit a television ghost hunter, played by Jared Harris, to get to the bottom of what’s going on inside their home.

Although it would be easy to be sceptical and cynical about yet another horror remake, the trailers for Poltergeist suggest that it could be a genuinely scary return to that world.

Thomas Hardy’s Far From the Madding Crowd is a literary classic and a great example of a story with a strong female at its heart. Director Thomas Vinterberg, fresh from impressing the world with The Hunt, has foregrounded the feminism for his take on the timeless tale.

The film is gaining solid reviews from critics, with Mulligan’s performance and the direction coming in for specific praise.

Chris Rock was widely lauded for his work on comedy Top Five when it was released in America last year. The comedy, which has been described as smart and mature, is also written and directed by its star.

The film follows Andre Allen (Rock), who was a famed stand-up comedian before taking a role as a crime-fighting bear in a series of popular, but trashy, movies. He is interviewed by a reporter (Rosario Dawson) who wants to know what happened to “the funniest man in America”.

Trailers have plenty to enjoy and Chris Rock is a reliable comedic presence. In what has been a mostly dismal year for American comedy, this could be a pleasant surprise.

Horror films that rely on a central gimmick are often a bit of a waste of time. Set entirely on a computer screen, in the midst of an ill-fated Skype chat, Unfriended could easily have been undone by its own high concept.

The film is set on a computer owned by Blaire (Shelley Henig), who is chatting online with her boyfriend and their group of friends. It’s the anniversary of the death of one of their fellow students, who committed suicide after an embarrassing video of her was leaked online. They are joined within the chat by a phantom user, claiming to be their deceased peer.

Unfriended is a genuinely scary film which makes great use of a central conceit that could’ve damned it. It’s not in the same league as modern horror hits like The Babadook and It Follows, but it’s a satisfying chiller.

Best known as the host of satirical US programme The Daily Show, Jon Stewart turns film director with Iran-set torture thriller Rosewater. It traces a true story, of which Stewart’s programme was a part.

Maziar Bahari (Gael García Bernal) is a journalist covering the controversial Iranian presidential elections in 2009. He is detained by security services, who believe him to be consorting with the CIA as a result of a satirical Daily Show interview he gave.

I saw Rosewater at the BFI London Film Festival and it is a terrific directorial debut. It’s equal parts harrowing and hilarious. Either way, it’s definitely worth seeking the film out if you can find a cinema showing it.

Despite one of the most troubled productions in living memory, Mad Max: Fury Road has finally made its way onto cinema screens this month. Original trilogy mastermind George Miller directed once again, with Tom Hardy stepping into Mel Gibson’s shoes.

Hardy’s Max becomes embroiled in chaos when he crosses paths with Furiosa (Charlize Theron). She has freed the five wives of a vicious cult leader and is now on the run.

The film is drawing rave reviews from all over the world, described by Variety as “unfettered B-movie bliss”. Things are about to get mad.

The original Pitch Perfect film was a sassy, smart antidote to a world in which teen musicals meant Glee and very little else. As such, it’s little surprise that the Barden Bellas are back for Pitch Perfect 2.

After a catastrophic performance in front of the US President, the Barden Bellas are banned from the acapella circuit. They must compete in an international competition to clear the name, but no American team has ever managed that feat before.

The first film was an absolute blast and really cemented Anna Kendrick as a bona fide star. The Glee landscape isn’t quite as ripe for skewering now, but there’s enough life in these characters to make it work.

Very little is known about Tomorrowland, other than the fact that it is directed by Brad Bird and stars George Clooney in a central role. Trailers have kept the narrative refreshingly discreet, so this could be a blockbuster that saves its surprises for the screen.

Clooney’s character – an inventor of some kind – travels with a young girl to a strange science fiction world.

It’s incredibly exciting to be going into a major studio film release whilst knowing almost nothing about the plot. This might hurt the film when it comes to box office, but hopefully there will be enough word of mouth to marshal Tomorrowland to decent numbers.

Which films are you planning to see in May 2015? Are there any I missed or any you will definitely be avoiding? Let me know in the comments section.