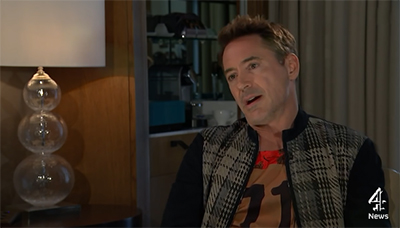 The internet lit up this week when Robert Downey Jr, one of the stars of latest Marvel movie Avengers: Age of Ultron, walked out of an interview with Krishnan Guru-Murthy for Channel 4 News. The actor took exception to questions posed by Guru-Murthy about his time in prison and and history of drug addiction.

It seems that the Channel 4 anchor has learnt no lessons from his disastrous 2013 interview with Quentin Tarantino, promoting Django Unchained.

Initially, the interview was pleasingly normal. Guru-Murthy fired in a couple of interesting questions about the superhero sequel and the nature of the genre in general. Downey Jr provided him with some nice answers in response. So far, so press junket.

Then, however, Guru-Murthy opted to switch gears. He began to pose questions about the connections between Tony Stark and Downey Jr, before wildly veering into the topic of the actor’s stint behind bars. After a brief “are we promoting a movie?” quip, Downey Jr played along, batting away the questions with polite responses.

When Guru-Murthy pushed on, Downey Jr simply stood up and left the room.

The consensus surrounding the walkout seems to be painting Robert Downey Jr as a celebrity "diva" who wilted in the face of hardcore grilling from a dogged journalist.

This shows that Krishnan Guru-Murthy and, indeed, the media at large have no understanding of the purpose of the movie publicity circuit. It’s an exercise that actors, largely, dislike as they are forced to spend entire days answering the same handful of questions about a film.

The two groups of people that benefit are the journalists, who get an A-list interview for their programme or publication, and the studios, who gain publicity for their film.

It’s a relaxed interview setting, in which celebrities are primed for a light-hearted chat. It is the not the right time to lob in a curveball question about past misdemeanours. Beyond the simple inappropriateness of the questioning, though, there is little journalistic value in prying into a chapter of Downey Jr’s life that closed years ago.

Film critic and producer Scott Weinberg put it very nicely in a series of tweets.

I don’t give a damn how famous someone is. You don’t dredge up their unpleasant past for your own selfish needs. Fuck you, @channel4news.

A good writer knows how to cook up original questions for a press junket. This was not that. It was a calculated tabloid-level attack.

Unless RDJ writes an autobiography, I don’t care about his past. He was a mess. He got better. Now he’s a superhero. It’s a good lesson.

It is wrong to paint this ambush as some sort of triumph for investigative journalism. Film stars promote movies in interviews because their contracts stipulate that they do so. They do not deserve to be ambushed by the dregs of their past in the name of producing a bit of controversial journalism and they are well within their rights to refuse to play ball with sensationalism.

Robert Downey Jr has turned his life around and has now taken his position as one of the most bankable movie stars on the planet. Every word that can be said about his past has already been said.

No one needs Channel 4 to drag it out of him.

Do you agree with me about the Robert Downey Jr interview walkout? Do you think it was right for the Avengers star to be questioned about his past? Let me know in the comments section.