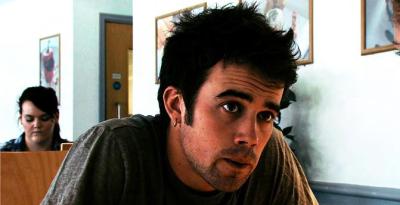 Portsmouth-based director Adam Nelson’s debut feature, Little Pieces, is an unusual film, but one that showcases great ambition from a first-time filmmaker.

The film will premiere in London on Wednesday, with a view to getting noticed on the festival circuit.

Nelson certainly cannot be faulted for his ambition. In the press notes, he cites Stanley Kubrick, Christopher Nolan and Paul Thomas Anderson as influences. He describes Little Pieces as a film that, at least initially was “a film about storytelling”. Certainly, the movie is keen to never play it safe, as it messes with time and completely eschews conventional narrative.

There’s a kinetic visual feel to the film that provides real momentum in certain scenes. Unfortunately, Nelson is a much better director than he is a writer, with much of the dialogue feeling over-written and the structure occasionally more frustrating than it is engaging. By the time the plot unravels in a satisfying conclusion, much of the initial intrigue of the premise has dissipated.

The performances, too, are a mixed bag. Veteran Graham Cawte anchors the cast with a subtle, near-wordless turn, but many of the lead performances too often descend into forced melodrama. Notably, a beautifully-pitched scene in an ice rink at the film’s midpoint feels more relaxed and improvised, emerging as Little Pieces’ biggest highlight.

In fact, Little Pieces really excels when Nelson strips back the dialogue and lets his visuals tell the story. Free of the occasionally clunky words on the page, the performers are well-directed in their quieter moments. It’s in these sequences that the story is told, with the film making the most of its tiny budget.

For all of its flaws, Little Pieces marks a solid debut from Adam Nelson, who could well be an unconventional new voice in British independent cinema. It’s a film that constantly battles the limitations of finance and time and, although not entirely successful, it puts up a hell of a fight.

You can keep up to date with the progress of Little Pieces and its director via the film’s Facebook page.