With awards season now over and glistening statuettes placed in cabinets to begin gathering dust, the strange cinematic month of March begins. It’s too late for the prestige awards movies and too early for most of the major studios to flex their blockbuster muscles, leaving a strange set of films working through multiplexes in the UK.

There are, however, plenty of interesting movies out there this month, including the latest installment in a hot YA franchise, a heartfelt British drama about mathematics and a whole gaggle of action heroes punching people in the mouth.

Here are the ten films you absolutely have to see in March.

The big news around Michael Winterbottom thriller The Face of an Angel prior to release has been that it marks the major acting debut of British model Cara Delevingne. It was at the Toronto Film Festival in September, before I got the chance to see it at the BFI London Film Festival in October.

Based around a fictionalised version of the Amanda Knox murder trial, the film follows Daniel Brühl’s scriptwriter as he pens a screenplay inspired by the case.  Along the way, Brühl encounters an American journalist (Kate Beckinsale) and her fellow reporters, who regularly meet to exchange information and speculate wildly about the case. Delevingne, however, is the best part of the film in her role as a Brit student with plenty of local knowledge.

The Face of an Angel isn’t entirely a great film, but there’s enough going on to merit a trip to the cinema to see this ambitious, often absorbing, thriller.

Omnipresent pop sensation Rihanna makes the move to the big screen at the head of the voice cast for DreamWorks animation Home. She stars alongside Jim Parsons – known globally as The Big Bang Theory’s oddball physicist Sheldon Cooper – as the human girl befriended by Parsons’ alien.

Aside from some sort of plot about an invading alien race and new host planets, this is simply yet another animated film that revolves around the cute, evolving relationship between a human and some sort of other, invariably cuddly, creature.

The voice work of Rihanna and Parsons, though, looks like good fun and there are certainly plenty of laughs in the trailer. It’s unlikely to be the next How to Train Your Dragon, but it could be an enjoyable trip out for the kids.

In the first of March’s noisy action releases, Sean Penn stars as a highly-trained special operative who must battle to clear his name in The Gunman. It’s an adaptation of a page-turning thriller novel, helmed by the director of Taken, so we definitely know what we’re getting.

Penn’s military sharpshooter, like all of his ilk in cinema history, wants to get out of the game that is dragging the joy out of his life and leaving him with a debilitating case of PTSD. However, thanks to a bad decision he made earlier in his career, that proves to be more difficult than first anticipated.

The continuing onslaught of ageing actors “doing a Neeson” is mostly an entertaining one and there’s no reason to imagine that The Gunman is going to be anything other than a fun thrill ride. 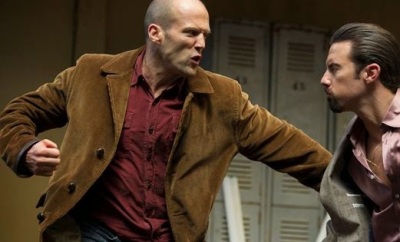 The former features Neeson collaborating with director Jaume Collet-Serra for the third time – after Unknown and Non-Stop – as a hitman who must take on his former boss in order to protect his son. Needless to say, there will be lots of shooting and running unbearably slowly from Neeson – the King of Geri-action.

Wild Card stars Statham as a recovering gambling addict, who decides to help a young woman when she is brutally beaten and raped. In true action movie fashion, there’s more to just about everything than meets the eye.

Two popcorn-guzzling action movies featuring capable modern action heroes. If that floats your boat, then take your pick of the two this month.

Proving a fairly divisive piece of work on the festival circuit, White Bird in a Blizzard is a mystery thriller, starring Shailene Woodley, who will be appearing again on this list very soon.

Woodley plays a young woman whose life is rocked at the age of 17 by the sudden disappearance of her mother (Eva Green). The film follows her struggle to solve the mystery, whilst also balancing the difficulties of her own life.

Buzz for the film has been incredibly mixed, but critics seem fairly unanimous on the strength of Woodley’s performance, so White Bird in a Blizzard may well be worth a look just for the spectacle of a great young actress taking on some very interesting work.

Shailene Woodley, again, is set to dominate cinemas as March gives way to April with young adult sequel Insurgent – the latest entry in the Divergent franchise.

After splitting from the constraints of the faction system at the climax of Divergent, Tris (Woodley) and Four (Theo James) are on the run from the villainous Erudite faction and its icy leader (Kate Winslet). As they attempt to crack apart the corruption of their world, they desperately seek allies.

Divergent was an interesting, if relatively unremarkable, YA thriller powered by Shailene Woodley’s reliably stellar central performance. There’s an interesting concept at its heart, so Insurgent could set up the Divergent franchise as the true successor to 2015’s YA departure – The Hunger Games.

Still Alice is likely to forever be known as the film that finally won Julianne Moore the Oscar for Best Actress, after four unsuccessful nominations. Thanks to the baffling nature of international release schedules, it’s only just arriving in UK cinemas this month.

Moore plays the title character, whose life is rocked when she is told that she has early onset Alzheimer’s. When she receives the shocking news that the illness was inherited from her father, this causes distress for her family, including daughter Lydia (Kristen Stewart).

Whilst Still Alice has received mostly middling reviews, it’s likely worth a watch just to see one of the world’s top performers at the height of her powers.

Ryan Reynolds has a career in need of reform. He is best known for bad comedies like The Change-Up and, of course, the disastrous superhero movie Green Lantern. In fact, he’s done little of note since Buried in 2010.

The Voices is his most interesting project in years. He plays a happy-go-lucky guy who avoids taking his prescribed medication for mental health issues. This manifests in him hearing his animals talk to him, and often convincing him to do awful, violent things to women.

The film is a black comedy with a dynamite premise and Reynolds’ performance has been widely praised since the film’s Sundance debut last year.

Premiering at Toronto before moving to the BFI London Film Festival, uplifting drama X+Y is a beautifully British film in just about every way, even as its events spread out across the globe.

Asa Butterfield, best known as the star of Hugo and Ender’s Game, stars as autistic mathematic prodigy Nathan. Under the guidance of his supportive mother (Sally Hawkins) and wise-cracking tutor Mr Humphreys (Rafe Spall), he makes it to the International Mathematical Olympiad.

Inspired by a true story, X+Y is a film that rests on its tender central performances. Butterfield, especially, is truly remarkable here in a role more subtle than some of his previous work. You’ll laugh and you’ll cry, but you’ll almost certainly leave as I did – with a smile on your face.

Read my full review of X+Y from the London Film Festival at Empire Online.

After shocking the cinema world with his low-budget debut District 9, Neill Blomkamp managed to upset just about everybody except me with the much-maligned Elysium. He’s looking to get back on the path of critical approval with another intriguing sci-fi in the shape of Chappie.

Long-time Blomkamp collaborator Sharlto Copley stars as the voice of the eponymous robot, who is a police droid given new programming by a group of young scientists. As he begins to showcase the ability to think and feel, he is seen as a threat by the authorities, who look to take him down.

Blomkamp has a real eye for interesting, ideas-based sci-fi set in distinctly non-glamorous futures. Chappie looks like another great idea from a man who could well become one of this generation’s most original cinematic voices.

Which films are you planning to see in March 2015? Are there any I missed or any you will definitely be avoiding. Let me know in the comments section.