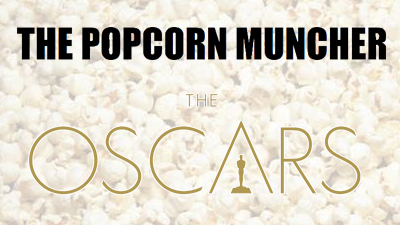 Tonight, the 87th Academy Awards will be announced live from the Dolby Theatre in Hollywood. This week on The Popcorn Muncher, I’ve been running through my predictions for the major categories, including acting, writing and directing.

I’ve already predicted the Best Picture winner, but once again, I’ve asked a selection of guest contributors to advocate for each of the films up for the big prize at Oscars 2015. The debate was a big success last year and, this year, I hope it will be another great read.

(Editor’s Note: I couldn’t find a single person to advocate for this film, so here’s a discussion of why it doesn’t belong on the Best Picture ballot.)

Of all the films nominated for Best Picture at Oscars 2015, the one which has kicked up arguably the most fuss is American Sniper.

It’s also the film which, by many accounts, does not belong at the biggest award show in film.

Countless allegations of promoting American propaganda, and the anger over the use of a plastic baby were controversial enough, but in the end, the film really didn’t have any chance of standing alongside superior films in its genre such as The Hurt Locker. So why is it being tipped for the most prestigious awards in the business?

Perhaps a majority of American critics were enamoured by the film’s focus? Or maybe – with no disrespect to serving military men and women of course – it’s more of a courtesy given how Chris Kyle himself has posthumously become a national treasure? Whatever the cause may be, American Sniper doesn’t really deserve any of the nominations it has received, making it the black sheep of the Academy Awards

Rob Cain is a journalism student and writes a blog in which he reviews movies and video games.

There are many reasons why Alejandro G. Iñárritu’s brilliant comedy drama Birdman should win the biggest achievement in film this year, none more so than the esteemed director’s ambitious film techniques.

In this story of washed-up actor Riggan (Michael Keaton) and his search for recognition among the upper echelons of the acting world, Iñárritu masterfully uses one long continuous take to track his characters through doorways and side passages to expertly emphasise this invasive look at Riggan’s psyche.

Not only is Riggan’s descent into madness exemplified in the film’s direction, but also in Keaton’s wonderful performance. In his first lead role in five years Keaton is stripped bare as we see him tackle inner demons and outward mockery with verve and emotion. Keaton’s supporting cast follow in his brilliance as Emma Stone, Edward Norton, Naomi Watts, Zach Galifianakis and Andrea Riseborough prove to be hilarious additions to this quirky drama of magical realism.

Whether Birdman is successful at Oscars 2015 is unimportant. It’s a brilliant demonstration of the exciting developments in today’s film industry and is a clear example of a stellar leading cast and director committed to the camera.

Hollie Wong is Editor of the Bournemouth Rock newspaper and also blogs about film at Cinema Planet.

You’ll probably know Boyhood as the film that took director Richard Linklater 12 years to make. The biggest compliment that I can pay is that you won’t notice that after 30 minutes.

Boyhood is a coming-of-age tale that doesn’t rest on one big defining moment, but captures all the little moments that go in to shaping a personality. It could almost be a documentary, as its story of growing up explores the issues that affect Mason’s family without ever slipping into melodrama.

Linklater lets his film breathe in a way that none of the other contenders for Best Picture do and its lack of showiness just cements the feeling that you’re watching a family, rather than a group of actors playing one.

Admittedly, watching a young guy grow up post-millennium is going to resonate a bit more with a young guy who grew up post-millennium. Hell, its soundtrack feels like it was ripped from my iTunes. But out of all the nominees I’ve seen – sorry American Sniper, I promise to check you out when you’re cheap at HMV – Boyhood is the one that has stuck with me the most.

Validation at Oscars 2015 would be nice, but the film’s impact will echo long after the red carpet has been rolled up.

Ben Tyrer is a journalist, interested in games and film. You can see more of his work on his blog.

The Oscars are frequently criticised for rewarding a certain style of film. There’s the biopic (A Beautiful Mind), the Holocaust picture (Schindler’s List/Life is Beautiful) or the feel-good sleeper (Slumdog Millionaire/The King’s Speech).

Perhaps this year, at Oscars 2015, the Academy should turn its attention to stylised filmmaking over filmmaking of a certain style. For this reason there really can only be one candidate: The Grand Budapest Hotel.

Wes Anderson populates his centralised, symmetrical world with a cast of rich, farcical characters headed by Ralph Fiennes. As Gustav charms the guests of the titular hotel, Fiennes charms the audience – erasing all memory of his snarling turn as Voldemort.

Each character masterfully deadpans Anderson’s whimsical script, which displays less of the snark of The Royal Tenenbaums and more of the pastel-hued joy shown in Fantastic Mr Fox. As with all Anderson films the plot isn’t necessarily the most important element and the film zips along quickly.

Anderson lives up to the bold statement of intent he makes with his title. The hotel certainly is grand, the staff are perfectly cast and it looks immaculate. I just wished we could have stayed a little longer.

Adam Fisher is a huge film fan and is currently studying English at Bournemouth University.

If only Alan Turing had been American, called Brock and married Joan Clarke. That way this masterful telling of one of the most (if not the most) important actions in modern history would be a sure thing for the Best Picture gong at Oscars 2015.

However, being English and not winding down with an idyllic war hero lifestyle will mean The Imitation Game may struggle to turn the heads of the Academy, who have already been generous to one story of individual accomplishments during the Second World War in recent years (The King’s Speech).

Dealing with something as complicated as breaking the Enigma Code could have merited a full movie in itself. However, to its credit, the film doesn’t only stick to the actions of breaking Enigma, but looks with great nuance at the before and after of Turing’s life.

Whilst at times you feel like it’s telling two different stories, what this movie does is aptly shine a light on how a nation denied freedom to a man who gave it its own. Perhaps The Imitation Game’s greatest accomplishment is how it makes a film which involves a lot of staring at objects exciting.

It’s a great example of war-hero cinema but also an eye-opening and exploratory look at how history mistreated someone whose place in the Second World War should really be at the forefront. It tells the story of Alan Turing in a way that honours his accomplishments and the hardship he endured to make them.

Luke Stevenson is a children’s journalist at Community Care and an avid cinema-watcher.

Selma has been utterly snubbed by the Academy outside of the Best Picture category and I cannot comprehend why.

It’s a fantastic film that looks at one of the most significant events in Martin Luther King’s fight to see his dream come to reality, but it does more than that. It presents an honest portrayal of King as a true revolutionary who was willing to put people on the front lines and in severe danger to make change happen and yet mourned every loss along the way.

Every single member of the cast, from a career-defining performance by David Oyelowo to the entire supporting cast, is on top form and each get a moment to shine. The fact Oyelowo does not have a Best Actor nomination and Bradley Cooper does, for American Sniper, is a joke.

Maybe it was easier for the Academy to digest a film where America is treated as the complete moral good against the “evil minorities”, rather than a film that highlights an uncomfortable time in history that still lingers today.

I’d like to see the Academy recognise Selma’s brilliance at the Oscars 2015.

Patrick Wilson is a journalist, interested in film, gaming and the world of professional wrestling. He is also the host of the Bournemouth Rock’s online film podcast.

The Theory of Everything

The Theory of Everything  has already done pretty well on the awards circuit, winning the Alexander Korda Award for Best British Film, and Best Adapted Screenplay at the BAFTAs, Best Original Score at the Golden Globes and lead actor Eddie Redmayne sweeping up three major awards for his fantastic performance as Stephen Hawking.

Winning Best Picture at Oscars 2015 really would be the cherry on top. The film features a fantastic line-up of actors alongside its main man, including Felicity Jones and David Thewlis, who all deliver heartbreakingly realistic portrayals of their real-life counterparts.

Although the film has been criticised for not placing much emphasis on Hawking’s research, I think it actually presented an opportunity to the audience to understand him on a more personal level. I certainly didn’t know much about his life before seeing the film.

It has also attracted attention by downplaying Hawking’s relationship with his nurse Elaine Mason, especially as the film was adapted from the memoirs of Jane Hawking, his first wife, but I don’t think that should overshadow the fantastic performances and raw emotion of the film.

Alys Penfold is a young journalist who writes about film, fashion and the environment. She blogs about the world around her on Tumblr.

Every year, the Academy Awards seem to nominate at least one plucky underdog in the Best Picture category. This year, that underdog is Damien Chazelle’s sensational drumming drama Whiplash. It’s not going to beat the big boys, but it could certainly give them a bloody nose.

The film is largely a macho two-hander as Miles Teller’s budding jazz drummer spars with tyrannical maestro JK Simmons. The latter is a whirlwind of expletives and aggression, hoovering up almost every major supporting actor award in the last few months.

Chazelle’s film is an impressively stripped-down story of one man’s desperate attempts to please another and earn his appreciation. The dialogue is whip-smart and the bravura editing really helps the musical sequences hit another level. But the entire thing feels like a set of building blocks, moving towards the best finale in years.

The last 20 minutes of Whiplash are, quite simply, astonishing. Both central performers convey so much through music, conjuring a cacophonous musical finale that finds true logic and clarity within its noise.

It would be an enormous surprise if Whiplash were to win the Best Picture prize tonight, but for me, it’s one of the most purely cinematic experiences of the last few years. Drum roll, please…

Tom Beasley is the Editor of The Popcorn Muncher and a huge nerd for the horror genre. You can read more of his journalism work via his online portfolio.

If you’d like the chance to weigh in on The Big Best Picture Row, simply add your two cents to the comments section below. We’d love to know who you’re backing to win at Oscars 2015.