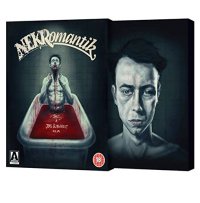 There’s a tendency for extreme horror movies to become cult classics over time. For German filmmaker Jörg Buttgereit, years of censorship were the key to converting his zero-budget shock flick, Nekromantik, into a movie that still sparks debate almost 30 years after its original release.

After being granted an 18 certificate by the BBFC for the first time, Nekromantik is now available on remastered Blu-ray courtesy of Arrow Films.

Rob (Bernd Daktari Lorenz) has a grisly vocation – clearing up human remains after tragic accidents. Unbeknownst to his employers, Rob is gradually amassing a collection of human body parts. One day, as a treat for partner Betty (Beatrice Manowski), he brings home an entire dead body, which quickly becomes a way for the couple to act out their darkest and most depraved desires.

It’s difficult to understand what exactly Nekromantik is trying to achieve. The film veers wildly from gratuitous gore to pretentious attempts at salvaging art from the straight-up shlock premise. There’s something incredibly disturbing and seedy about a film that seems to think an extended scene of three-way necrophilia should be cut as a romantic montage.

Buttgereit seems to be caught between a juvenile need to shock and appal and a desire to produce something that at least somebody will consider art. Unfortunately, he only succeeds in the former, with the enormously graphic violence conveyed via admittedly impressive practical effects. There’s plenty of splatter, but very little in the way of substance or soul. The hideous climactic scene, especially, is a prime example of Buttgereit’s willingness to sacrifice story for shlock.

The one thing worth praising about Nekromantik is the excellent restoration work by the team at Arrow Films. Buttgereit’s grainy Super 8 footage has been converted into a crisp Blu-ray that still retains the grubby authenticity of the original print.

Despite this hard work, Nekromantik is a turd that proves impossible to polish.

There’s a real wealth of material on show here, including a brand new interview with Jörg Buttgereit and documentary Morbid Fascination: The Nekromantik Legacy. Alongside this new content, there’s a brief introduction to the film from Buttgereit and an audio commentary featuring him and co-writer Franz Rodenkirchen as well as an archive featurette and several of the director’s early short films.

Made  by a director driven by his need to shock his audience more than anything else, Nekromantik is a film with very little to offer. Gorehounds may revel in the pitch black depravity of the film’s most troubling scenes, but Buttgereit’s story is certainly dead on arrival.

Despite the efficiency of the new high-definition transfer, Nekromantik is still grubby shlock of the worst kind.

Nekromantik is available on Blu-ray now courtesy of Arrow Films.