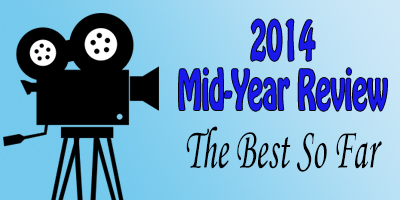 With awards season now a distant memory, 2014 is already halfway done. The world of cinema has yielded another bundle of films, with varying degrees of success. Studios seem to be saving their biggest releases for the tentpole-heavy summer of 2015, but the first six months of this year have certainly not disappointed.

The Lego Movie showed just how witty animated comedy can be, Captain America shone in his second solo film and The Wolf of Wall Street set records for swearing up a storm. However, none of those films were good enough to make the list of the five best flicks to fill cinemas this year.

In the same year as the cynical Transcendence, Her is a breath of fresh air that truly understands the integration of technology into human existence. Spike Jonze’s tale of a lonely man – brilliantly played by an understated Joaquin Phoenix – who falls in love with his computer operating system is subtly played and surprisingly tender.

Phoenix gives one of his best performances in years, providing the perfect anchor for audiences to latch onto. Jonze’s barely perceptible shift into the future gives a real glimpse into what society could become without scaremongering about a technological dystopia.

Whether it’s cracking jokes or tugging at the heartstrings, Her is an absolute delight of a film that was completely deserving of its Best Original Screenplay prize at the Oscars.

Read my full review of Her here.

Jack O’Connell has definitely arrived as a future giant of cinema. He is soon set to star in Unbroken, directed by Angelina Jolie from a Coen Brothers script, which is about as star-studded a production as any lad from Derby could dream of headlining. On the evidence of Starred Up, he’ll fit into the A-list just fine.

Written by former prison councillor Jonathan Asser, the film nails the complex inner workings of a brutal nick. O’Connell bristles with both ferocity and vulnerability, especially when he comes nose to nose with a fellow con who also happens to be his father.

The violence is unflinching, the script is sharp and the visuals are suitably grubby. Starred Up is the best slice of Brit grit in a long time.

Read my full review of Starred Up here.

There isn’t much to say about Steve McQueen’s excellent historical drama 12 Years a Slave that hasn’t already been dissected in the months since it picked up the Oscar for Best Picture.

Chiwetel Ejiofor gives a controlled, soulful performance for the ages as Solomon Northup, kidnapped and sold into slavery for more than a decade. There’s strong support from debutant Lupita Nyong’o and a terrifying Michael Fassbender. McQueen’s Turner Prize-winning artistry enriches the film, producing some of the most affecting visuals I have ever seen.

12 Years a Slave is the kind of film that people will still be talking about years from now. It’s something really special.

Read my full review of 12 Years a Slave here.

In 2011, Welsh director Gareth Evans released his Indonesian martial arts film The Raid. Set in a single apartment block, it was a skull-crushing ride of a movie that created a new high watermark for fight choreography and martial arts cinema.

Evans and star Iko Uwais returned this year with the expansive, bigger and better sequel The Raid 2. The action of the first film is radiated outwards as Uwais’ cop goes undercover into the midst of the Jakarta underworld.

The fights are every bit as intense and balletic as in the first movie and Evans really benefits from a bigger canvas on which to paint. Hopes are high for the threequel.

Read my full review of The Raid 2 here.

The McDonagh brothers are two of the most interesting filmmakers currently working. Following the success of The Guard, John Michael McDonagh’s second feature is the utterly perfect Calvary.

Brendan Gleeson gives the performance of his career as a priest who is told at confession that he will be murdered a week later. It’s ostensibly a whodunnit, leading to the final beach showdown, but the identity of the assailant feels like an irrelevance after the engrossing drama McDonagh builds.

Like a cross between Father Ted and ITV drama Borderlands, the film uses the gorgeous Irish scenery to create a dream-like atmosphere that perfectly houses Gleeson’s flawed hero.

John Michael McDonagh continues to go from strength to strength and, in Gleeson, he has found the perfect regular collaborator. I can’t wait to see what they do next.

Do you agree with my top five? Which films would you like to have seen on the list? Keep an eye out in the coming days for more from my mid-year review, including the worst films of 2014 so far and the films to look out for in the second half of the year.