It’s October, which means the cinema is about to get scary. Except it isn’t. Despite the looming spectre of Halloween at the end of the month, the packed slate for October is largely free of major horror releases – with the notable exception of Guillermo del Toro’s new film.

Elsewhere, there’s the small matter of a new James Bond film on the horizon, a reinvention of a classic fantasy tale and a couple of major awards contenders sneaking in too. Whether it delivers on the Halloween front or not, this month is certainly stacked.

Here are ten films you should head out and see this month in UK cinemas.

The Peter Pan story is a well-worn tale on the big screen, most notably in the 1953 Disney animated movie. This latest take on the universe, from Atonement director Joe Wright, is essentially an origin story for Peter and Captain Hook, the latter of whom has both hands and is actually on Peter’s side.

It feels like Pan has arrived a little late to the revisionist fairytale party, a few years after Mirror Mirror and Red Riding Hood. However, trailers tease a visual treat aided by some delightfully off-kilter casting in the shape of Hugh Jackman as the extravagant villain Blackbeard.

If nothing else, Pan should be an interesting take on the story and it has to be better than the uneven 2003 version.

It’s becoming routine for director Robert Zemeckis to sell his films on their visual clout rather than their storytelling. His latest, The Walk, is no different and focuses on the true life story of tightrope walker Philippe Petit that was the subject of Oscar-winning documentary Man On Wire.

Joseph Gordon-Levitt puts on his best French accent, although there seems to be a touch of Monty Python to the thing. The film looks set to be something of a heist movie as Petit and his team set up their iconic high wire stunt between the Twin Towers, culminating in the walk itself.

Zemeckis is a major champion of 3D and IMAX technology and he has said in interviews that he sees The Walk as the culmination of his career. Hopefully the final product is more than just a pretty face.

Watson stars as a young girl who accuses her father of abuse, but Hawke’s detective discovers that the father has no memory of the crime. With the help of David Thewlis’ professor, regression therapy is used to help him relive his memories in the hope of uncovering the truth.

Trailers for Regression tease a pitch-black story that twists in interesting directions and has unexpected turns. With an A-grade cast and an impressively dingy visual palette, this could be a genre treat for Halloween.

At Cannes earlier this year, The Lobster had its world premiere and competed for the Palme d’Or in a flurry of positive reviews. Set in a dystopian near future, the film has been an offbeat comedic hit on the festival circuit for Greek director Yorgos Lanthimos in his English language debut.

In the world of The Lobster, single people are transported to The Hotel, where they have a 45 day period to find a mate. Those that don’t succeed are transformed into animals and sent out into the woods. The film focuses on one man who escapes the hotel and falls in love in the woods.

The premise is a delightfully strange one and the cast, including Colin Farrell, Rachel Weisz, Olivia Colman, Ben Whishaw and John C Reilly has tonnes of talent on show. It might be tough to find in UK cinemas, but it could be an unexpected treat.

Documentarian Rodney Ascher burst onto the scene in 2012 with his award-winning doc Room 237, which dissected the many fan theories surrounding Stanley Kubrick and his iconic horror classic The Shining. He’s back and exploring the issue of sleep paralysis in The Nightmare.

The film follows eight people who have experienced the strange, often terrifying phenomena that accompany sleep paralysis. Ascher then uses actors to recreate their visions of horror, with innovative results.

The Nightmare is another example of Ascher transcending the standard doc formula in order to produce something innovative. With a horror edge, this could be one of the best scary movies of the year.

The suffragette movement is such an important part of British history that it seems remarkable that there hasn’t been a major movie made about it, until now of course. Directed by Brick Lane helmswoman Sarah Gavron from a script by Shame and The Iron Lady writer Abi Morgan, this could be the heavyweight historical drama that these iconic women deserve.

Carey Mulligan stars as fictionalised figure Maud, who becomes embroiled in the struggle for women’s rights. As part of the campaign, she clashes with Brendan Gleeson’s authority figure, who believes that women are wives and mothers rather than political voices.

With such an emotive central storyline, a distinctly British flavour and performances from the likes of Meryl Streep, Suffragette seems like a guaranteed contender for awards season.

After scoring his biggest box office hit with Skyfall in 2012, James Bond returns to screens with Spectre – bringing back the eponymous evil organisation last seen in the Connery era. Daniel Craig will portray Bond for the fourth time, alongside Monica Bellucci and Blue is the Warmest Colour star Lea Seydoux, with Christoph Waltz on villain duties.

There’s a new regime in place at MI6, with Ralph Fiennes taking over after the death of Judi Dench’s M in Skyfall. A cryptic message from his past has Bond on an unstoppable crash course with the shadowy criminal company SPECTRE and the mysterious villain Oberhauser (Waltz).

Skyfall was the best Bond in years and, with Sam Mendes back in the director’s chair, the standard seems unlikely to drop for Spectre… whether Christoph Waltz is actually Blofeld or not. 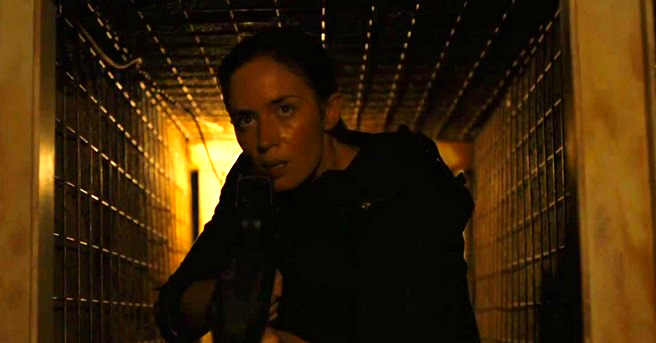 The war on drugs has long been fertile ground for filmmakers, most notably in Steven Soderbergh’s multi-stranded thriller Traffic. In the latest spin on the genre, Prisoners director Denis Villeneuve tells a morally murky tale in US-Mexico border thriller Sicario.

Emily Blunt takes the lead role as a straight-laced and morally certain CIA agent who is recruited by Josh Brolin’s maverick to take part in a questionable operation at the border. Benicio Del Toro is terrific as Brolin’s enforcer and there’s a palpable sense of threat to every moment of the film.

Sicario, which I saw at a preview screening two weeks ago, is one of the best films of the year and continues to showcase Villeneuve as an intense filmmaking talent with a masterful visual eye.

For years, Macbeth has been the Shakespeare play that has been the best fit for the big screen. Filmmaking legends, from Welles to Polanski to Kurosawa, have tried their hands at ‘The Scottish Play’. The latest attempt to transfer Shakespeare’s bloody masterpiece from page to screen falls at the door of Justin Kurzel, who burst onto the scene with brutal thriller Snowtown in 2011.

Kurzel casts Michael Fassbender as the fiercely ambitious Scottish noble who murders his way to the throne under the advice of his wife, played by Marion Cotillard. Sean Harris stars as Macduff – the only man capable of unseating the violent, and increasingly paranoid, King.

Since its premiere at Cannes earlier this year, Macbeth has received rave reviews for its intensity and visual style. It looks set to be a real treat of a film and could soon be the definitive version of the play on the big screen.

Gothic haunted house tale Crimson Peak marks Guillermo Del Toro’s return to the horror genre after a brief detour to make kaiju smash-‘em-up adventure Pacific Rim. It’s always a delight to see the man behind Cronos and Pan’s Labyrinth coming back to the dark side.

The film follows Mia Wasikowska’s writer, who falls in love with Tom Hiddleston’s aristocrat and goes to live in his enormous mansion. There’s something odd about his sister (Jessica Chastain) and, it becomes increasingly clear, the house itself.

With Del Toro’s visual invention on top gear and an impressive level of darkness, Crimson Peak could be the genre hit of the year. Add to that the fact that much of the effects work is done practically in camera and you have the recipe for a great Halloween movie.

Which films are you planning to see in October 2015? Are there any I missed or any you will definitely be avoiding? Let me know in the comments section.