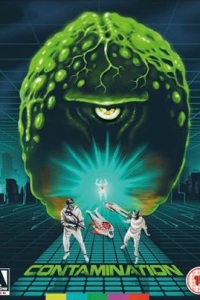 Ridley Scott’s Alien was a monster hit in 1979. Soon after its release, the film was seen by Italian filmmaker Luigi Cozzi. Having just made the Star Wars inspired sci-fi flick Starcrash, Cozzi was no stranger to reimagining American cultural smashes for a European audience. With the world of Alien alive in his mind, he wrote a similar film at the behest of his producers at Cannon Films. The eventual movie, which brings alien eggs to earth in a mass conspiracy, was eventually retitled Contamination.

Contamination is now available on Blu-ray in the UK, courtesy of Arrow Films.

NYPD cop Aris (Marino Masé) sees the rest of his team violently explode when they investigate a pulsating egg-like object on an abandoned boat. He later joins government agent Holmes (Louise Marleau) to discover why these artefacts made their way to New York. Their trail leads them to former Mars astronaut Hubbard (Ian McCulloch), who was driven mad by what he saw on the planet.

| "If you’re always in that condition, it’s obvious you couldn’t get it up even if you used a crane."

During the 1980s, Contamination found itself on the video nasties list along with recent Arrow release Island of Death. This film, however, lacks the desperate desire to shock that comes with so many of those releases. Cozzi does deliver a generous quantity of gore, but it feels organic to the story the film is telling, which centres on the murderous capabilities of exploding alien eggs.

Contamination is a textbook example of 70s/80s B-movie shlock, combining its European sensibilities with an American setting. The script is full of clunking dialogue, the actors are melodramatic to an absurd degree and there’s a noticeable creakiness to just about every frame. Despite all of that, though, the film is great fun.

There’s a real joy to Cozzi’s filmmaking, gleefully ripping off everything from Alien to Psycho. Contamination doesn’t have a single original bone in its body, but it blasts along at a real rate of knots in the early stages, complete with some genuinely impressive lo-fi practical effects. The explosive gore is beautifully judged and the creepy creature effects in the third act are a triumph of shoestring filmmaking.

Arrow’s new 2k restoration of the film brings the visuals to life in impressively bold fashion. The audio sounds great, but has slight dialogue synching problems common to many European films of the time period, which were often over-dubbed in post-production.

| "What the hell happened to these people?"

For all of its flaws, Contamination is an entertaining ride of a film packed with gorgeous set pieces. None of the actors were ever going to win awards for the movie and the whole thing is a shameless rip-off of a number of better horror films, but in the realm of video nasties, it’s one of the better examples.

As with most of Arrow’s Blu-ray releases, there’s a generous package of bonus features. Included are an audio commentary from Fangoria editor Chris Alexander, a 2014 Q&A with Cozzi and McCulloch, interviews with Cozzi and musician Maurizio Guarini and a fun look at the trend for Italian cinema to cash-in on American genre successes.

Luigi Cozzi’s Contamination is a shlocky 1980s B-movie in just about every way. That doesn’t prevent it from being immensely entertaining though.

The acting is creaky, the script poorly written and the story rips off dozens of better films, but it still holds up, particularly in terms of its practical effects.

It’s not going to blow anyone’s mind, but Contamination is well worth an hour and a half of your time.

Contamination is available on Blu-ray from today courtesy of Arrow Films.