After months of waiting and feverish speculation, the first trailer has arrived for the return of the Star Wars franchise. The 88 second preview gives away very little plot detail, but offers tantalising glimpses of the film’s world ahead of the UK release of Episode VII in December 2015.

With JJ Abrams at the helm and a number of memorable old faces returning to their iconic roles, The Force Awakens could be the film that brings the iconic sci-fi franchise back to form following the lacklustre/disappointing/terrible/abominable (delete as appropriate) prequel trilogy.

Despite its brevity and relatively enigmatic nature, the first teaser trailer for the film gives us plenty to be excited about ahead of Star Wars: Episode VII – The Force Awakens. 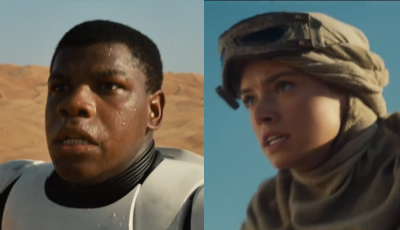 The most striking thing about the initial trailer for The Force Awakens is that it doesn’t feature a single shot of its iconic returning characters. We don’t get to see a grizzled Mark Hamill as Luke Skywalker or Harrison Ford returning to his trademark Han Solo smirk.

Instead, the new Star Wars teaser focuses on the young talent at its centre. The first face we see is that of Attack The Block star John Boyega, who was announced as the film’s hero back in April.

He’s in a Stormtrooper outfit, which raises a tonne of questions about his allegiance and motivations. Has he changed sides? Or, is he pulling the same trick Luke Skywalker pulled to rescue Leia in A New Hope?

We also see Daisy Ridley’s mysterious character, riding some sort of speeder. It’s been heavily speculated that she is the daughter of Han and Leia, but whatever happens, she is destined to be an integral part of the story.

On top of the two pivotal newbies, we get a brief glimpse of Oscar Isaac – last seen as a troubled folk singer in Inside Llewyn Davis – at the helm of an X-wing. It’s pretty thrilling stuff.

The droids are back in town 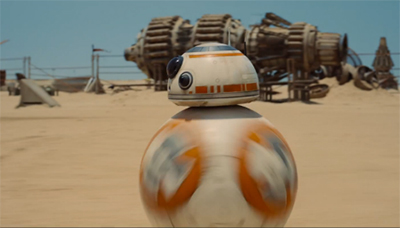 It’s not Threepio and it’s not Artoo, but the trailer for Star Wars: Episode VII shows us one of JJ Abrams’ new robotic creations, skittering along like a cross between a droid and a football. Loveable non-human characters were a huge part of what made the original Star Wars trilogy so much fun, so it’s great to see that the new film looks likely to continue that tradition.

Much has been made of Abrams returning to practical effects for The Force Awakens and the trailer certainly seems to support that, with a fusion between practical and CGI.

And George Lucas probably can’t just stick a CGI beast in the middle of this one. 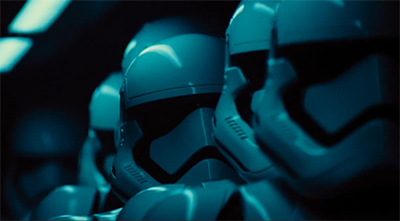 In the original Star Wars trilogy, Stormtroopers quickly became something of a joke. Initially lauded for the accuracy by Obi-Wan Kenobi, they are later shown to be nothing more than generic incompetent henchmen. Despite having no real skill or experience in combat, Luke Skywalker is able to dispatch dozens of them with little trouble.

However, they look suitably badass in this new trailer. Assembled on some sort of craft, they seem to be tooling up for a battle, complete with classic blasters. It looks like The Force Awakens could cast the Stormtroopers as the formidable fighting force that they were always supposed to be.

Lightsaber… with a twist 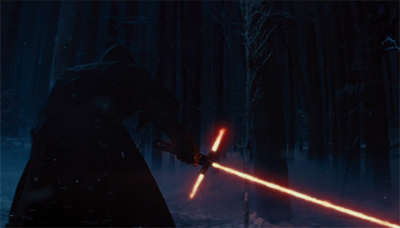 Few would disagree that Darth Maul is the best thing about The Phantom Menace. His double-ended lightsaber was probably the coolest thing that the three prequel films spawned.

In the latest trailer, we get a glimpse of a new Sith character – potentially portrayed by confirmed villain Adam Driver – wielding a red lightsaber, with some special additions.

This is one of the most exciting moments in the trailer, suggesting that the Sith have continued to innovate with their weaponry since the events of Return of the Jedi. It remains to be seen whether this is the only surprise addition to the arsenal of the dark side, but it looks to be pretty formidable either way. 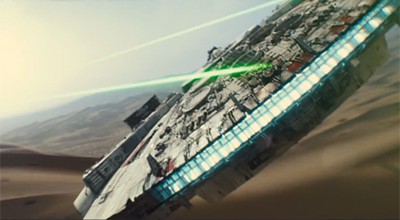 In one of the few moments of shameless nostalgia in the trailer, we get to see the iconic Millennium Falcon in flight. The ship’s presence in the film had been leaked months ago, so it was a very wise decision to use it in the teaser to pique the interest of fans.

For anyone familiar with the Star Wars universe, the sight of Han Solo’s craft soaring through the air is sure to induce goosebumps. Given that it seems to be involved in a dogfight of sorts with Imperial TIE fighters, it’s safe to say that the Falcon could be a crucial part of Episode VII.

But is Han still at the helm?

John Williams is back

As much a part of the Star Wars universe as spacecraft, George Lucas or lightsabers, John Williams’ instantly unforgettable theme music makes its return in the trailer for The Force Awakens.

It wouldn’t be a Star Wars movie without Williams and, complete with the sight of the Millennium Falcon soaring through the skies, his theme music makes the trailer feel very special indeed. If anything is going to make fans feel comfortable and at home, it’s the music they recognise. More than perhaps any other aspect of the Star Wars universe, the John Williams theme is an essential aspect of any true film in the universe.

It will also be interesting to see what other music Williams has written for the film. Will we get something to rival ‘Duel of the Fates‘? 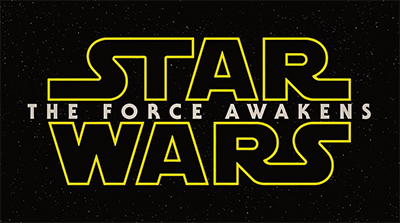 By the time Star Wars: Episode VII – The Force Awakens arrives in UK cinemas, it will be a decade since the series last hit multiplexes with Revenge of the Sith. That’s a long time for fans to get used to a world without new Star Wars films on the big screen.

However, the tone of this teaser trailer is perfect. It feels every inch a Star Wars film, whether it’s the effects, the music or the iconic weaponry. Abrams seems to have embraced the world he has been given the keys to and is producing a faithful tale within it – there doesn’t seem to be any gratuitous lens flare in sight.

It remains to be seen whether The Force Awakens will manage tone as well as its lean first trailer does. However, the preview suggests that all of the building blocks are in place for something very special indeed.

May the force be with you, JJ Abrams.


What did you think of the trailer for Star Wars Episode VII: The Force Awakens? Are you excited for the film’s release? Let me know in the comments section.

Remember to vote for The Popcorn Muncher in the UK Blog Awards.